After 3 glorious days in the Chilean Fjords, we headed back to the Pacific Ocean, where the waves were anxious to greet us agin. Not jumbo sized this time, but still a thrilling ride up the coast to Valparaiso, the second largest city in Chile, with a population of 301,000.

In 1906 a colossal earthquake flattened the city, and reduced it to rubble. Only a tiny section of the old city survived. Then, the economy was shattered when the Panama Canal was built, and overnight the ships stopped using the long ocean route around Cape Horn or through the Magellan Straights.

Valparaiso is 80 miles southeast of Santiago, and was founded in 1536. It is known as “The City of 42 Hills”. Because of the unique systems of funiculars that were used to transport people up these steep slopes, the city became a UNESCO World Heritage Site in 2003. The city now receives funding to restore some of the cable cars to working order. I hope this one is on the list…

We had the option of traveling to Santiago, but 4 hours in a bus did not appeal to us. With bad traffic, it could take longer. No thanks. That will be another trip, when we visit the Andes Mountains some day. Instead, we decided on a drive in the country, complete with wine, huasos, and horses.

Chile has been making wine for over 500 years in the Casablanca Valley. Our first stop, about an hour southeast of Valparaiso. The climate is very similar to Sonoma in California. Hot and dry during the day, with cool mornings and evenings. It only rains a few days a year.

The tour description did not divulge the name of the establishment we would be touring, so when we arrived at the William Cole Winery, I felt grievously slighted. Could there possibly be a more UNSEXY name for a chilean winery? And even worse, William Cole is from Colorado and does not have a single strand of Chilean DNA in his lily white body. However, all was forgiven after the first sip of a delectably zingy Sauvignon Blanc.

95% of the wine made in this region is exported throughout the world. Chileans don’t even drink it, according to our winery guide. They are partial to a liquor called “Pisco”, which is also made in Chile. It is a yellowish colored brandy made by distilling fermented grape juice into a high-proof spirit that is mixed with just about anything. The national drink is a Pisco Sour, made with Pica lime juice and powdered sugar.

Next stop was the Punta Cabalo Ranch, where we learned about the huaso (pronounced waso). He is a countryman and skilled horseman, similar to the American cowboy or Mexican charro, the gaucho of Argentina, Uruguay and Brazil and the Australian stockman. The straw hat they typically wear is called a chupalla. They also wear a poncho, called a manta or a chamanto over a short Andalusian waist jacket, and tooled leather legging over booties.

Huasos are generally found in Chile’s central valley. They tame the wild horse that later becomes their constant companion and many develop an extraordinary bond. Check out the photo sequence below that exemplifies the astonishing level of trust between man and beast. Apparently, they often sleep cuddled together for warmth during cold winter nights on the prairie while herding cattle. 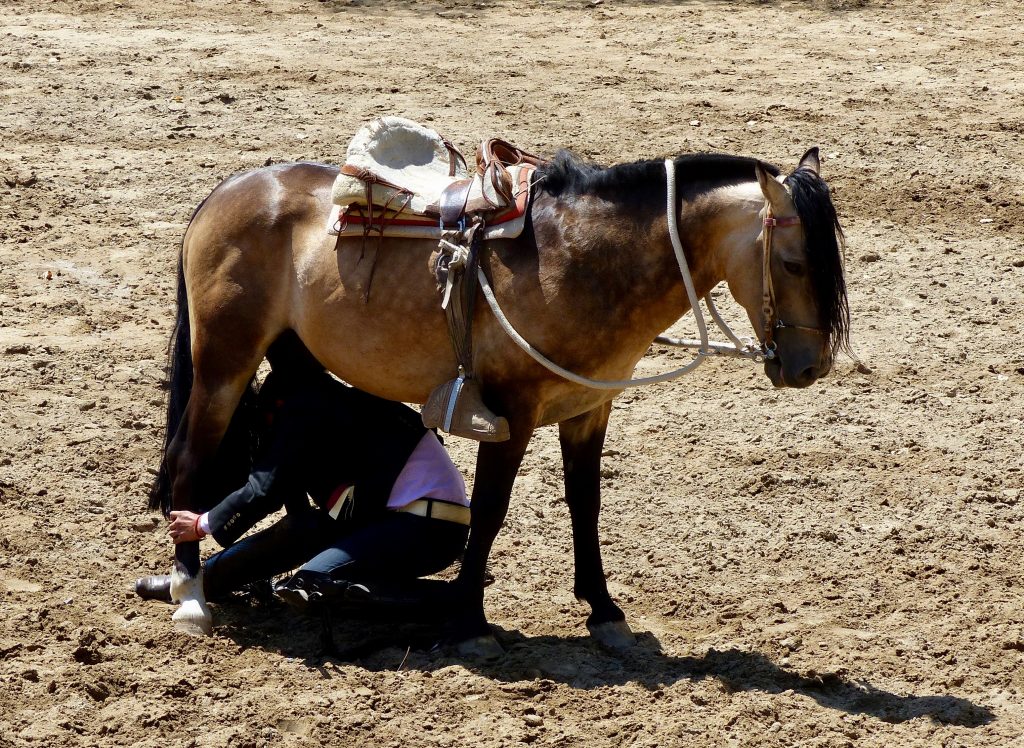 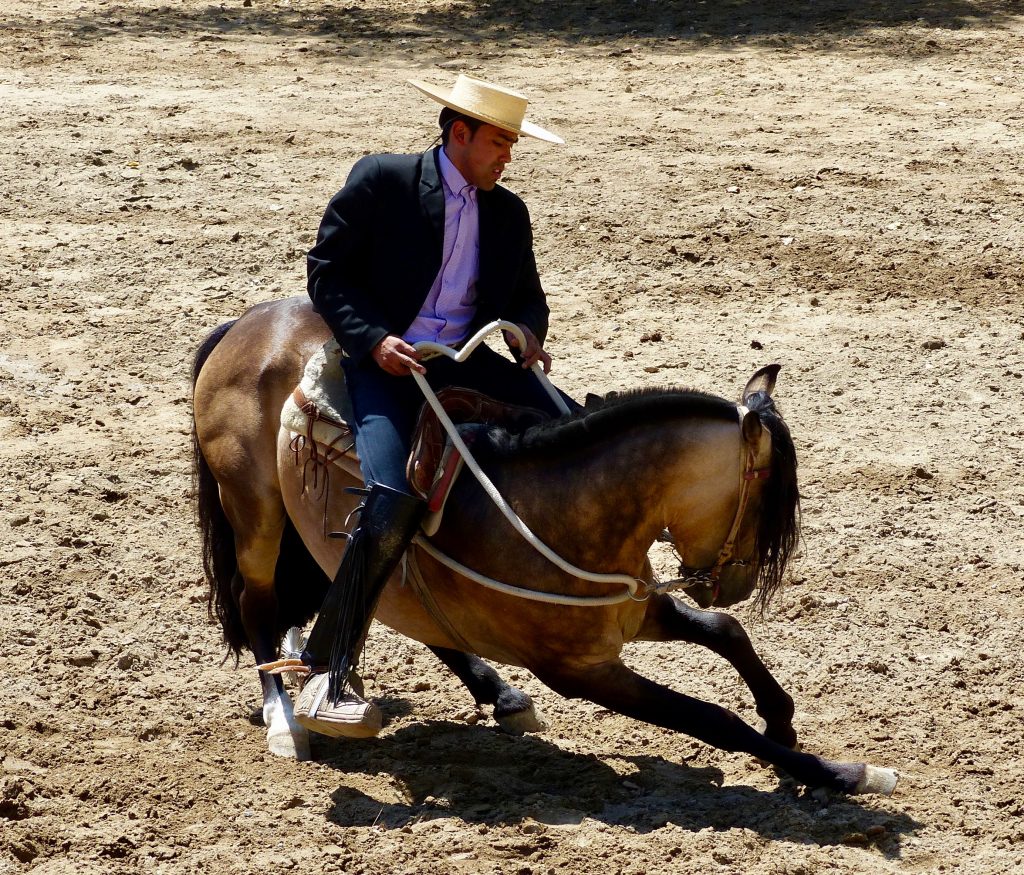 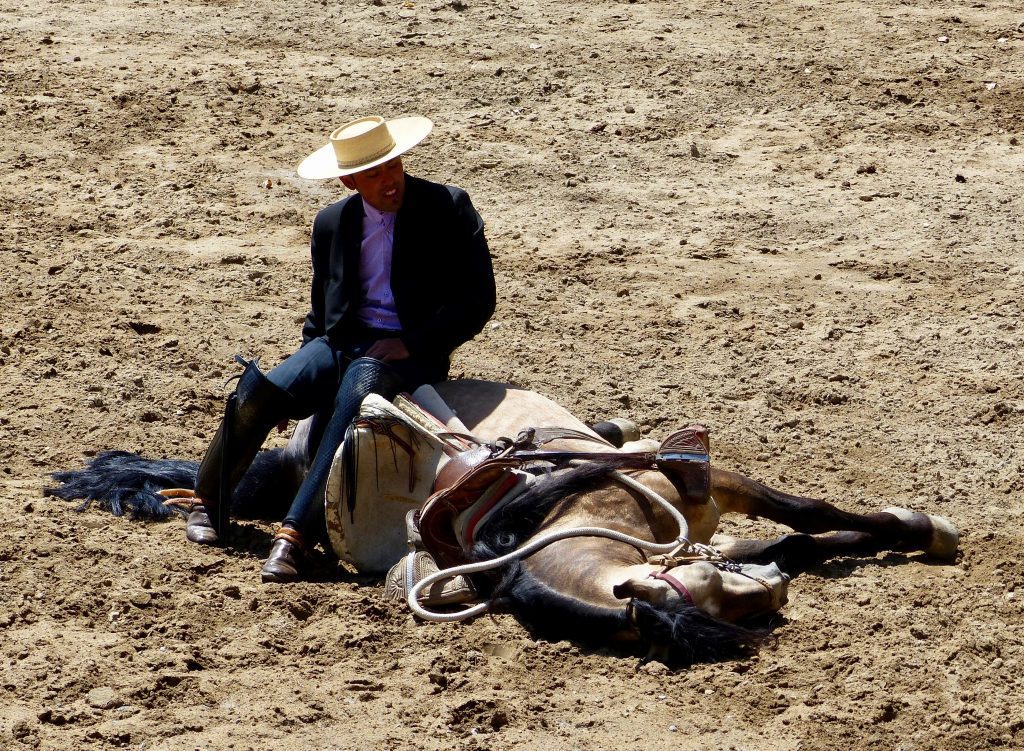 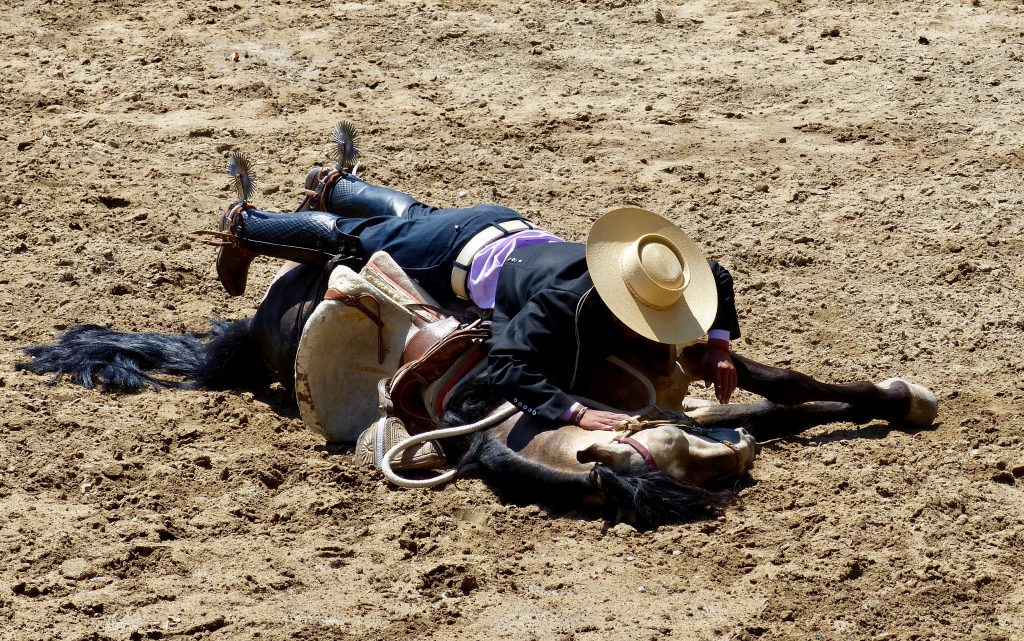 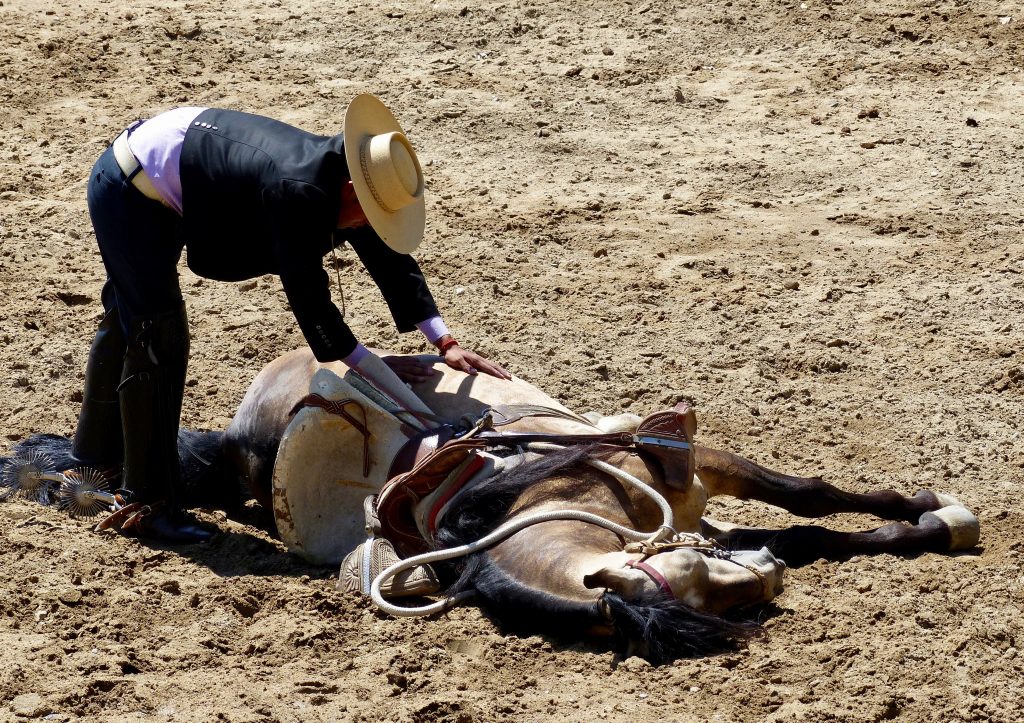 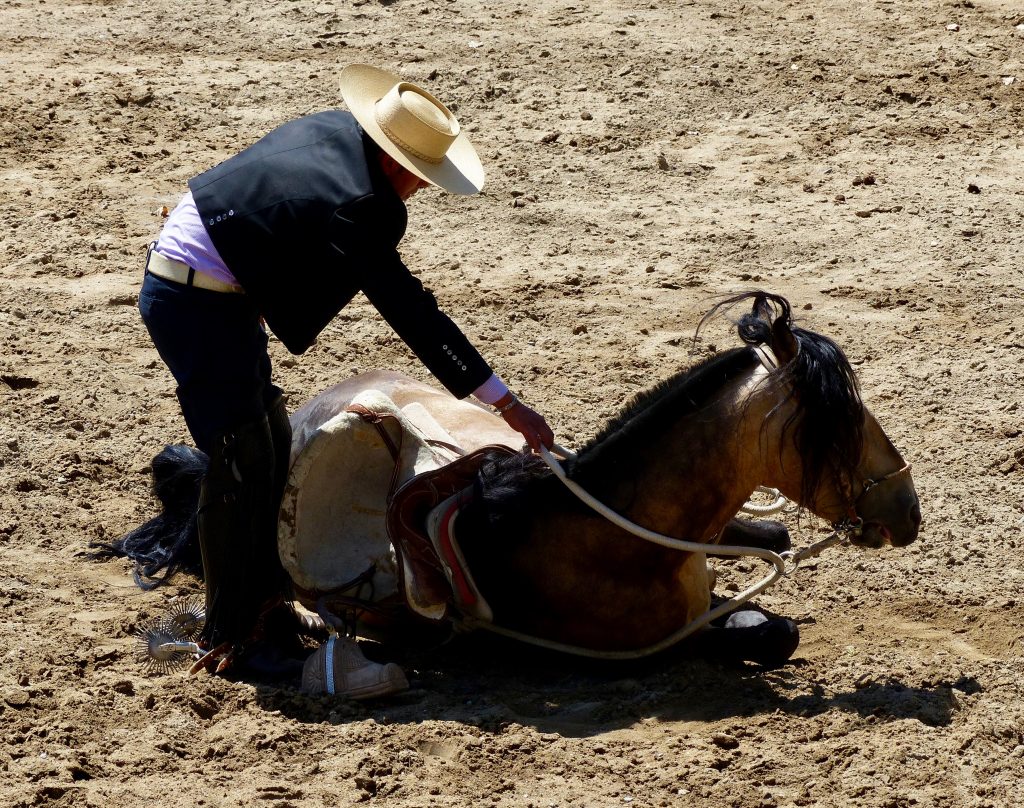 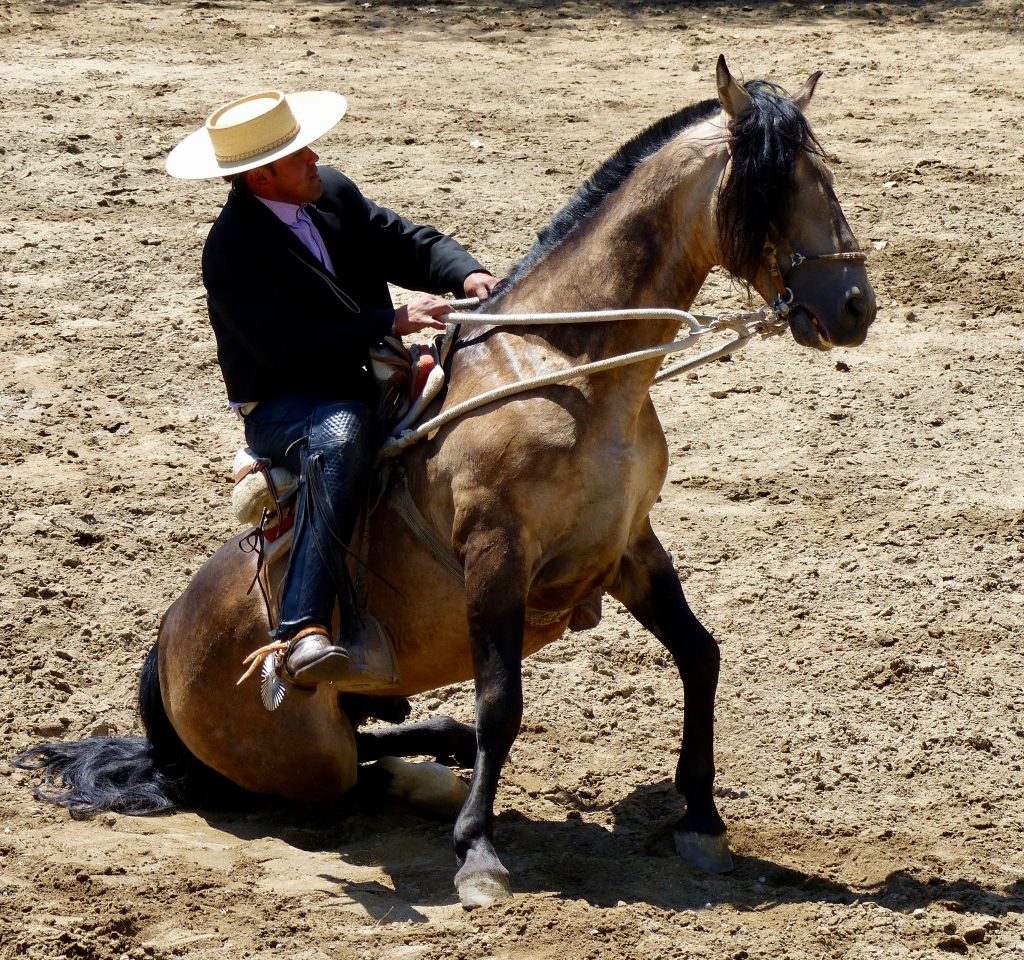 Huasos are an important part of Chilean folkloric culture and are a vital part of parades, fiestas, holidays, and popular music. The dancing of the Cueca is when a coy girl is courted by the persistent huaso, both traditionally attired, as seen below.

After a traditional lunch of guess what? Meat! We wandered around the ranch, and I came across the sweetest horse, EVER. Here he is. Take a close look, you can see me reflected in his eye. How cool is that?

Back on board, we relaxed with our recent acquisition of liquid refreshment. It was worth every peso. And… for all of you who gasped when you saw the $2,500 price tag, that translates to $4 US dollars. Yes, we are big spenders.

We will be leaving South America behind and heading west towards the Polynesian Islands in the South Pacific. After 9 days at sea, our next stop is Tahiti. We will do a “cruise by” of Easter and Pitcairn Islands along the way, so I will write about them next. They both have quite compelling histories.