After 6 luxurious days at sea, we arrived in Rio De Janeiro on February 3rd.

We were in Rio on the Queen Mary 2 in 2010, took a city tour, and visited Sugar Loaf Mountain. This city is always jam packed with visitors from around the world. The cue for the gondola was 3 hours long, but we made it. We gave up on visiting the iconic Christ the Redeemer statue because of the monstrous line. You can read about our last experience and see some stunning views by typing Rio into the search window on the right.

Pedro was a magnanimous guy. He reigned over Brazil for 58 years and was the only native-born emperor the country has ever known. He was born in Rio in 1825. The only son of seven siblings. His mother died when he was two, and his father was forced to return to Portugal when he was five. This five year old, “technically” became the new emperor then, but his Regents would make decisions until he turned 15. For the next decade, he was schooled by tutors for 12 hour a day. Only 2 hours was allocated for playtime. He was sickly, jaundiced, and friendless. Portuguese was his native language, but by age 11, he was also fluent in English, French, and Spanish. He was trained to hold his temper, and never express disappointment, frustration or even joy in public. A pretty repressive life for a kid!

When he came into power as a teenager, he was already considered to be a highly educated, tolerant, and progressive ruler. He was a great believer in education and founded many schools and universities. He was fascinated by science and technology, and when visiting Philadelphia in 1876, met Alexander Graham Bell who was demonstrating his new invention called the Telephone. When he got back to Brazil, he installed the nation’s first telephone in his Petropolis palace and because he wanted to make and get phone calls… installed a second one at the imperial farm in Santa Cruz.

Several of his closest friends were black, including his manservant and closest confident, so he made the decision to abolish slavery. The plantation owners were less then thrilled with this decision, so they turned their backs on him. Their loss of support helped pave the way for the Republic, who assumed power in a bloodless coupe in 1889. The emperor was exiled to France, and unceremoniously installed in a two star hotel, where he died of pneumonia, 2 years later.

The palace is impeccably maintained and modest (by royal standards), matching his humble nature. Unfortunately, photography was strictly prohibited, and not wanting to risk a trip to the dungeon, I decided not to sneak any shots. I was surprised to find rustic hardwood floors throughout, instead of ornate stone and mosaics. They are original, and in excellent condition due to the felt slippers we were required to wear over our shoes. These would never fly in the litigation happy USA… due to their slipperiness. I loved them! Skating through the palace was more fun then walking. I did ask permission to take a photo of my feet in the foyer. It was granted. 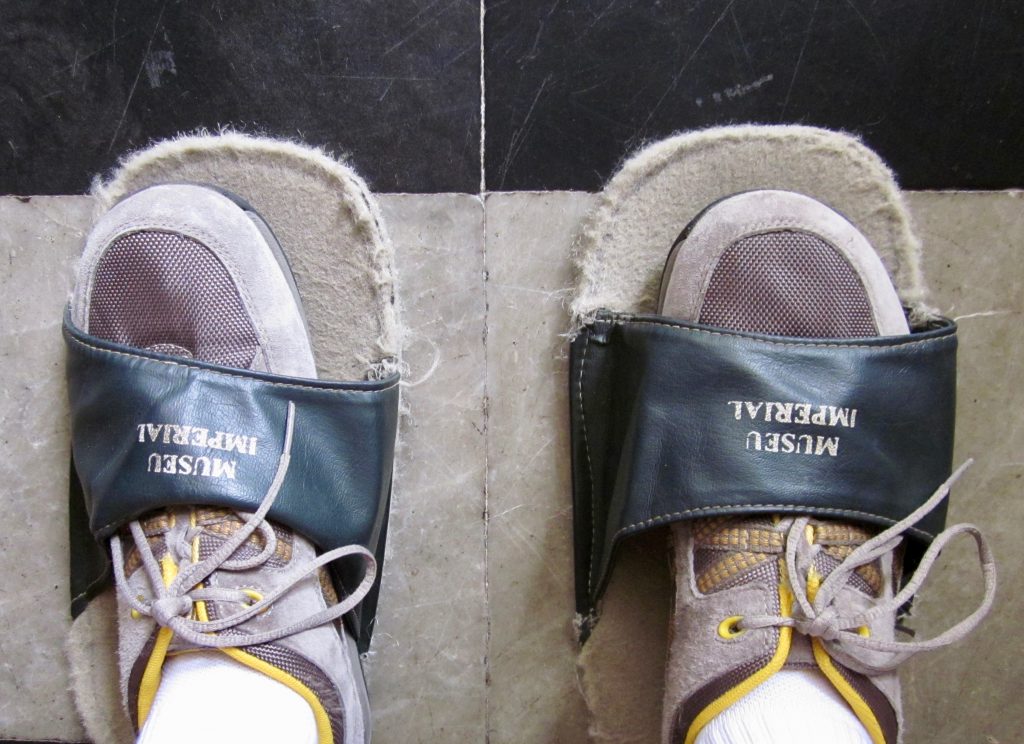 The most stunning artifact was the royal crown. The real one. It was made of solid gold with 639 diamonds and 77 pearls. It weighs 4.31 pounds. Okay, maybe he wasn’t so humble after all. We knew it was real because of the armed guard fidgeting next to the thick glass case. His fingers neurotically tapped the trigger of his holstered gun, as his eyes darted around the room. He looked slightly psychotic, which is probably a job requirement. It worked. No one tripped the alarm.

After leaving the palace we toured the lush grounds and basked in the cool misty air before strolling around town. Our next stop was lunch. The theme was meat, and lots of it.

Meat is king in this part of the world. Most adults eat over 300 pounds per year. More then any other part of the world. Vegetarians are not allowed across the border. If one does sneak through… they are shackled in chains, paraded around the village square, stoned, tormented, spit on, then ultimately roasted in a barbecue pit.

The “golden triangle” of beef production is the grasslands of Brazil, Uruguay, and Argentina, were 15 of the 18 grasses cows like to eat, grow naturally and in abundance. There is no need to supplement their diet with pesticide laden grains and artificial fillers. And, because the cows don’t have to walk very far for food, they don’t develop much muscle, which keeps the meat very tender.

Our guide coached us on proper etiquette before we arrived at the Brazilian steakhouse. He said we would be offered skewers of meat, and when we were done eating, to flip the card at our place setting from RED TO GREEN, or the food would keep coming. When he said a skewer… I envisioned a metal stick about 8 inches long with a few scraps of meat and veggies on it. I was very wrong. These skewers where 3 feet long, and each one was loaded with chunks of beef, sausage, chicken or pork. A pair of tongs sat next to our fork, and we had no idea what it was for. The more enlightened diners clued us in. As the waiter starts to cut off a chunk of meat from the skewer, our job was to grab it with the tongs and guide it to our plate. But that’s not all. Plates of tomatoes, cheese balls, onion rings, french fries, salsa, lettuce, potato salad, and a few things I could not identify were also heaped on the table.

It was awesome! I ate more beef in one meal, then I typically do in 3 months at home. The trick is the high heat barbecue. In Brazil they use coal. In Uruguay and Argentina, they use wood. Oh, and heart disease is epidemic here. Surprise!