In the early hours of September 19, 1994, the two volcanic cones on either side of the harbor exploded with little advance warning. Over the next two months – continual eruptions buried the entire town of Rabaul (the capital of New Britain Island) in over 8 feet of volcanic ash. Boulders as big as cars were vomited from deep inside the crater before landing on structures a half mile away. Both volcanos stopped spewing in early 1995, however, “Turvurvur” continues to pump out a billowy cloud of sulfurous gas – with it’s telltale “rotten egg” smell. Scientists expect another major eruption at any time. We passed Mother Nature’s handiwork on the way to our anchorage (see pic). It was an awesome sight.

Shortly after Rabaul was destroyed, the capital was moved to Kokopo. Many people chose to stay and rebuild. About one third of the town was “dug out”. Most is still buried. We saw rooftops peaking out of ash. Staircases leading to nowhere. Trucks buried. Many structures where just the shell remains. Piles of silky ash and mud were everywhere. Super fine dust flew through the air, coating everything in sight. When the monsoon rains hit the ash turns to mud and the hillsides give way. Roads disappear. Still, they stay.

Tourism (mostly scuba diving to see WWII wrecks) vanished with the eruptions. Very few people come here anymore – so the Queen’s arrival was a very big deal. I for one, was thrilled to be landing in such a primitive place. Beyond the dock, hundreds of locals sat on blankets covering the wet ash – selling handicrafts. We were unabashedly stared at by everyone. Especially the kids, many of whom had never seen a white person. As we strolled towards town, we accumulated families along the way.  They just smiled and walked with us. It was the strangest thing. I would stop to take a picture… and our little entourage would stop too. When we started moving again, so did they. Many spoke broken english and we were bombarded with questions along the way. Where did we come from? Where do we live? Where’s America? What’s a Maine? Why are you so tall? (Steve, not me) Where are you going? What’s wrong with your eyes? (that was my favorite – blue eyes don’t exist here) What’s that? (pointing to the binoculars around Steve’s neck). I felt like we were in a National Geographic Special.

We walked around for hours, marveling at the volcano’s destructive power – still so apparent after 15 years and the “Valium-like” mellowness of the people – which there is a good reason for. Most of the adult population is deeply addicted to the fruit from the Betel Nut Tree. They mix it with powdered lime to create a chewing gum. It induces euphoria, heightened awareness, and a general sense of well being. The “chewers” were easily identified by the condition of their mouths. Their teeth were eaten away by the corrosive acid in the lime and what’s left of them are pointy (Dracula style). Their gums are an unnaturally bright pink color… a cross between blood and Pepto Bismol. I had to turn away the first few times someone grinned at me, the sight was utterly repulsive. Many of the older people just have nubs left… and we wondered how they could chew anything at all. Dentists would be busy, if there were any, which there were not. We only saw a few food stores around with rusty canned goods on the shelves. Everything else is in Kokopo, which although geographically close, is a world away. Diabetes is also epidemic here.

Our last stop was at the working waterfront. We were delighted to witness a bunch of boys diving from a splintered boat wreck and rusted hull of a barge. They live in a half sunken boat – commune style – with several other families. The poverty here is profound.

On our way back to the dock we picked up a new set of tagalongs. We were getting used to the attention now… but it was still quite bizarre. We stop. They stop. We move. They move. A few questions this time, but mostly just walking slowly in companionable silence.

I love that the Queen Mary had a place like this on the agenda. No doubt, many of the haughty types wondered why we stopped in such a “vile” place. We thoroughly enjoyed every minute of our time here. I got a few mosquito bites… let’s hope the Malaria medication does it’s job. 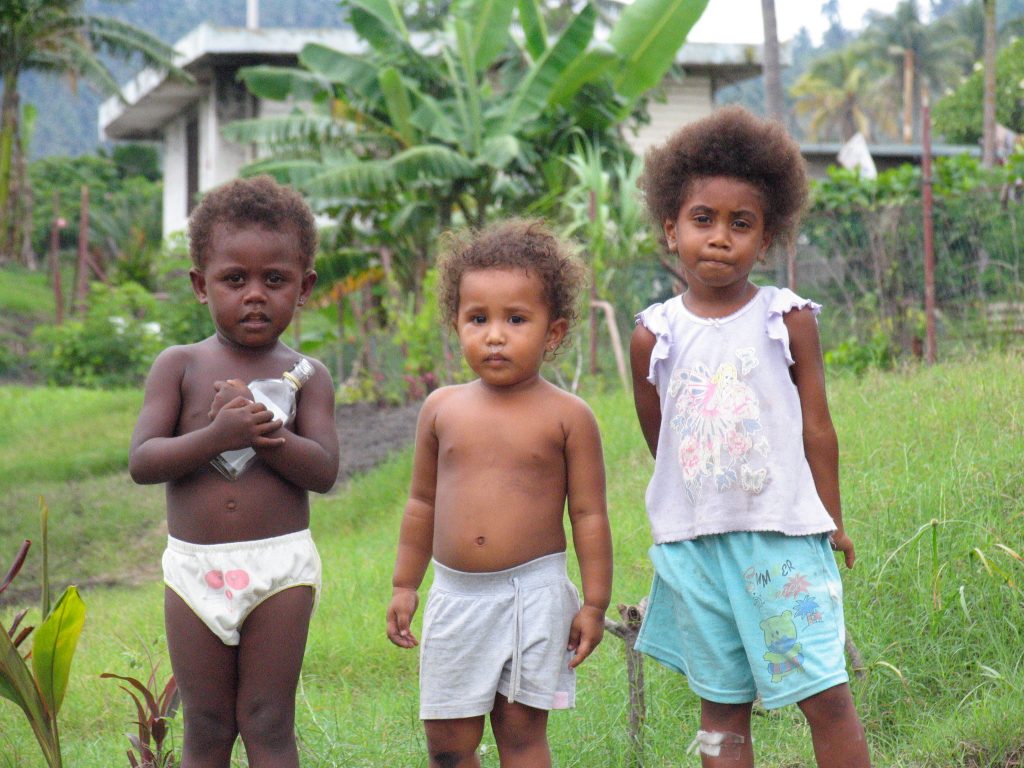