We headed towards southern Japan across the East China Sea today – after leaving Shanghai. Tomorrow we will spend the day in Nagasaki.  We were just told that the Japanese Government has decided to squelch our Internet Access, starting tonight, while we are in their waters and ports. Why? Perhaps it’s symbolic since we are on our way to Nagasaki. No formal reason was given.  Control issues?

We were thrilled to find out that we would be docking in downtown Nagasaki, instead of a remote container port. The city had just completed a brand new pier, big enough to accommodate the Queen Mary 2. The suspension bridge we crossed under was also constructed with the Queen’s height as a guideline. So… you can imagine how excited the locals were to have us arrive for our inaugural visit, so were we. It was dawn as we inched towards the bridge and I was shocked to see it was already densely packed with people. As we got closer, thousands of flash bulbs lit up the sky with whoops and cheers. I was so proud! It seems over the last 7 weeks I have developed quite a sense of ownership.

As we docked, a troupe of drummers in traditional costumes serenaded us on the pier. Traffic was at a standstill as people waved wildly and beeped their horns. Hundreds of spectators were lining the promenade as we slid towards the berth. We felt completely embraced in the warmest welcome we could have hoped to expect.

On August 9, 1945 – I doubt that anyone on the face of the planet would have predicted that a mere 65 years later – an ocean liner carrying “the enemy” would have been welcomed with open arms here. Well… almost open. All passengers and crew were fingerprinted and photographed by immigration officials before arrival. They interrogated Steve after finding his prints in their database… something about being seen eating sushi with a fork instead of chopsticks. He got off with a verbal warning, and a stiff fine. He tried to pay it off with Hong Kong dollars, but they wouldn’t take them either. Oh… and the Japanese government shut down our internet for three days while we were in their waters. Fear of geriatric spies perhaps?

For those of you whose World War II history is snoozing in a dormant part of your brains… 8/9/45 is the day the USA dropped a nuclear bomb on Nagasaki. 74,000 people died instantly. Another 70,000 died soon after. This marked the end of WWII with an unconditional surrender by the Japanese a few days later.

We secured a “one day” tram pass that allowed us to ride the cable cars throughout the city. The temperature was a gorgeous 50F and brilliantly sunny. Or first stop was Peace Park, near ground zero. The monument there (pic above) is deeply symbolic.

Next, we headed to the Atomic Bomb Museum. I barely held myself together. I stood crying as I looked at photographs of kids with radiation burns on 90% of their bodies and survivors scanning the wasteland for their families. A water tower was on display that once stood outside of a school. The metal legs were grotesquely twisted from the heat of the blast.

The museum was well done, although mountains of historical information was conspicuously absent. In the timeline of events leading up to the bombs… not one single word was written about the atrocities the Japanese Military inflicted on all the people and places they conquered in their quest for “World Domination”. The “Attack on Pearl Harbor” was absent as well… surprise, surprise. It angered me that the United States was depicted as unprovoked monsters. But history is simply HIS-STORY… leaving questions of accuracy and blatant omissions up to the person writing it, isn’t it? Then, when I saw a picture of a dead girl, hand curled around a baby doll whose face had melted away… well, let’s just say that my indignation faded away to. In war, there are no winners.

We spent the rest of the day wandering through the upper town. Many of the dwellings in Nagasaki are built on steep hills with no roads. There is a network of walkways that meander upwards, dotted with temples and crypts for commuters to use.

Back on board, the officials of Nagasaki were presenting the Captain and crew with “inaugural call” gifts – and vice versa. There was a presentation by young school kids in native costumes, that we missed… but I captured some of the girls when they were leaving the ship (pic below), each with a “Cunard” teddy bear.

Our “send off” was as heart warming as our arrival. It seemed that the entire city waved goodbye from the pier and the bridge. This was a very emotional day – in so many ways… from historical hatred to a modern day love fest.

I did check to see if Steve was “glowing” after dark, and was happy to see, only slightly.

We left Nagasaki, rounded the southern tip of Japan, then headed up the east coast towards Yokohama.

Our destination today was Kamakura, the ancient capital of Japan, from 1185 until 1333. We hoped on the commuter rail system (after painfully matching up the foreign symbols on our map with the directional signs on the train platform) and actually went in the proper direction! Bully for us! We only headed 30 minutes south of Yokohama, but we felt transported unto another era. The town retains more then 70 restored temples and shrines as a legacy of the period. We would only had time for a few.

There is a marked difference in architecture between Chinese and Japanese temples. As you have seen in previous photos, most Chinese temples are very ornate and colorful. Japanese temples tend to be more “earthy” in appearance, often in complete harmony with the landscape. They often look like they originate from the soil. The famous architect, Frank Lloyd Wright, was inspired by these structures and his designs reflect these principles.

Our first stop was the Zeniarai Benzaiten Shrine built in 1240. In a dream, Minamote Yoritomo saw a divine spring. He was told to “find it, and use the waters to offer prayers to the gods, and all the world will be at peace”. He did. Then, in 1257, Tokiyori Hojo (the Fifth Regent), visited the Shrine one day and washed his coins with the spring water, saying that coins washed here might be doubled. Hearing this, people began washing their coins in hopes of becoming rich. Today, coin washing is a daily occurrence. Coins weren’t enough for Steve… he wanted a higher yield, so laundered bills instead (see pic). There was a group of school boys who were deadly serious about washing their coins, thoroughly, in the troughs provided for this undertaking. It was adorable to watch (Steve and the kids).

Next, was a visit to the Great Buddha, dating back to 1252. He’s 35 feet tall and made from bronze. Back then… he was HUGE. This is an important pilgrimage site for Zen Buddhists worldwide.

As happenstance would have it… we came across an obscure little shrine while walking through a quiet neighborhood. We hiked up about 100 splintered steps to a building that looked like it emanated from the earth. 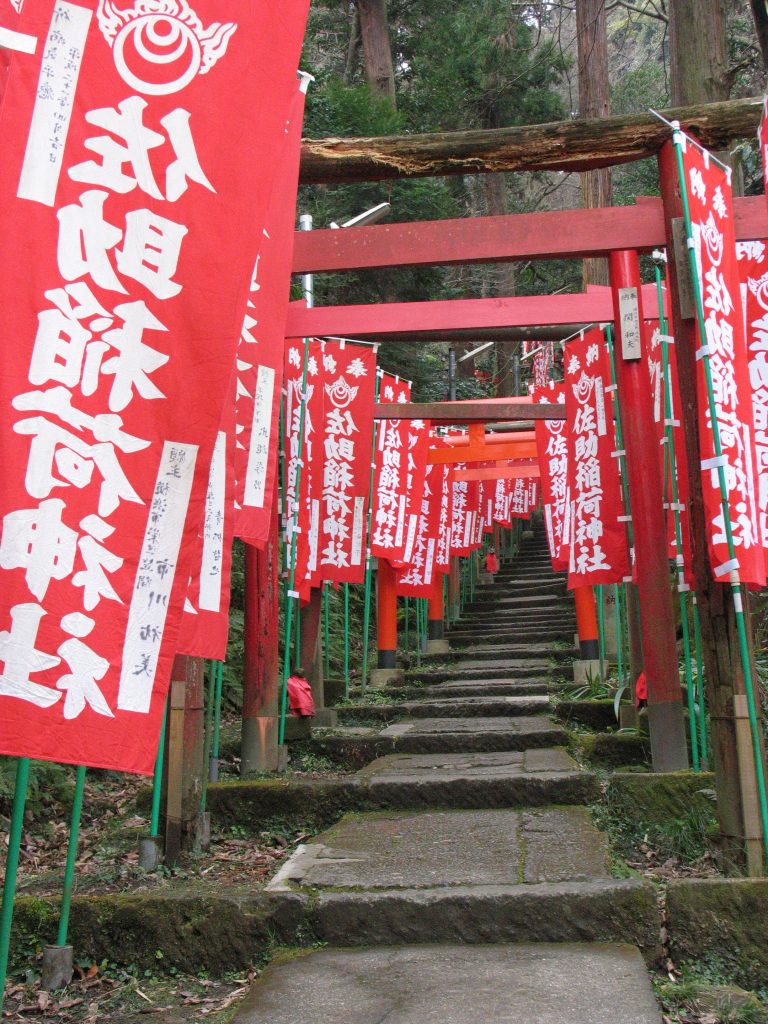 Nearby was an ancient monk selling incense sticks and tea from a moss covered hut. He had developed a unique relationship with the local squirrel population. We watched them crawl across the side of the building (one by one) and onto the countertop where they waited reverently for him to feed them a cracker. He spoke to each one. It was amazing to watch. They had no fear, nor did they try to tear into any other food. If the monk was busy doing something… they simply sat completely still and waited for him to return. A perfectly symbiotic relationship. The monk was so serene – that just being in his presence was intensely calming. We floated down the stairs when we left.

Our last stop was the Hasedera Temple. According to legend, in 721 AD, the pious monk Tokudo Shonin discovered a large camphor tree in the mountain forests near the village of Hase in the Nara region. He realized the trunk was so large that it provided enough material for carving two statues of the eleven-headed Kannon (the Buddhist Goddess of Mercy). One statue was enshrined in Hasadera Temple, the other (larger) one was thrown into the sea near present day Osaka with a prayer that it would reappear to save the people. 15 years later in 736 AD on the night of June 18, it washed ashore not far from Kamakura, sending out rays of light as it did. A temple was built to honor it. It is 30 feet tall and magnificent – with a crown of 11 miniature heads on top of the main on. Each one has a different facial expression, signifying that the deity listens to the wishes of all types of people. Photographs were forbidden, and I didn’t want my camera to spontaneously combust, so I played by the rules… although it was very very tempting. If you are interested in seeing a photo (it’s truly awesome), I am sure you can google the Hasedera Temple in Kamakura to see it. Sorry to tease you.

We thoroughly enjoyed our time in Japan! Sayonara!