We left Vietnam last night and spent today sailing northeast in the South China Sea towards Hong Kong. We were quite thankful for the precipitous drop in temperature during the journey from 97F to 50F in 24 hours. No more sweating while merely standing still. Yee Haa! Fun fact… we have now sailed 17,784 miles from New York.

Around noon today, we groped our way towards Hong Kong harbor through a menacing fog that gobbled up the multitude of ships around us. A symphony of deep throated horns, high pitched whistles, and bells, alerted us to the presence of our ghostly neighbors. I kept waiting for the sound of splintering timber as we crunched over the small fishing boats that seemed to materialize through the gray curtain, just inches from our bow. They all escaped unscathed, this time… (cue the evil laugh).

“Hong Kong” consists of Hong Kong Island, Lantau Island, the Kowloon Peninsula, the New Territories, and a collection of 262 islands in the South China Sea. “Hong Kong” translates into “Fragrant Harbor”, referring to the time when wood products and incense were traded. It was also the opium capital of the world back when the British Empire emerged. These drug dealers promoted addiction by making sure the supply of opium (from the Indian Poppy Harvest) never ran out, and in doing so prolonged the need for continued foreign presence. They would have promptly been put to death in modern day Singapore!

We “overnighted” at the port – so we didn’t have to worry about deadlines. It was 60F at 2 PM and the fog had loosened it’s grip. With only a few hours of daylight left, we hightailed it over to Lantau Island via the spotless commuter rail system to visit with the 100 foot high bronze Tian Tan Buddha Statue, nestled in the mountains above the Po Lin Monastery. Most of the island is lush and rugged… for now. I say that, because Disneyland Hong Kong recently opened up a theme park on the other side of the island… so who knows what other development is on the docket. I was very grateful that a roller coaster was not the backdrop for Buddha and that the monks own a huge parcel of land. We opted to take the half hour gondola ride to the edge of the village and walk to the monastery. A smart option, until I saw that the floor was solid glass, and it felt like we were going to plunge to our deaths hundreds of feet below. The Asian preteens sharing the ride with us decided to test the cracking tolerance by forcefully jumping up and down. That is, until they saw my horrified grimace. Damn kids.

The monks raised the money for the gondola along with the statue, knowing how important this destination would be for tourists and buddhists from around the world. It virtually eliminates the need for buses and taxis, keeping the village area free of choking fumes and noise. Now that’s forward thinking. The monks built the statue for the “Stability and prosperity of Hong Kong, for the well-being of the nation and the people, for the perpetuation of the Buddha Light, the ever-turning of the Dharma-wheel, and the peace of the world”. The statue is solemn and serene. The misty weather and chilly breeze were atmospherically perfect. We spent a few hours here soaking up the wisdom, before heading into the frenzied city. 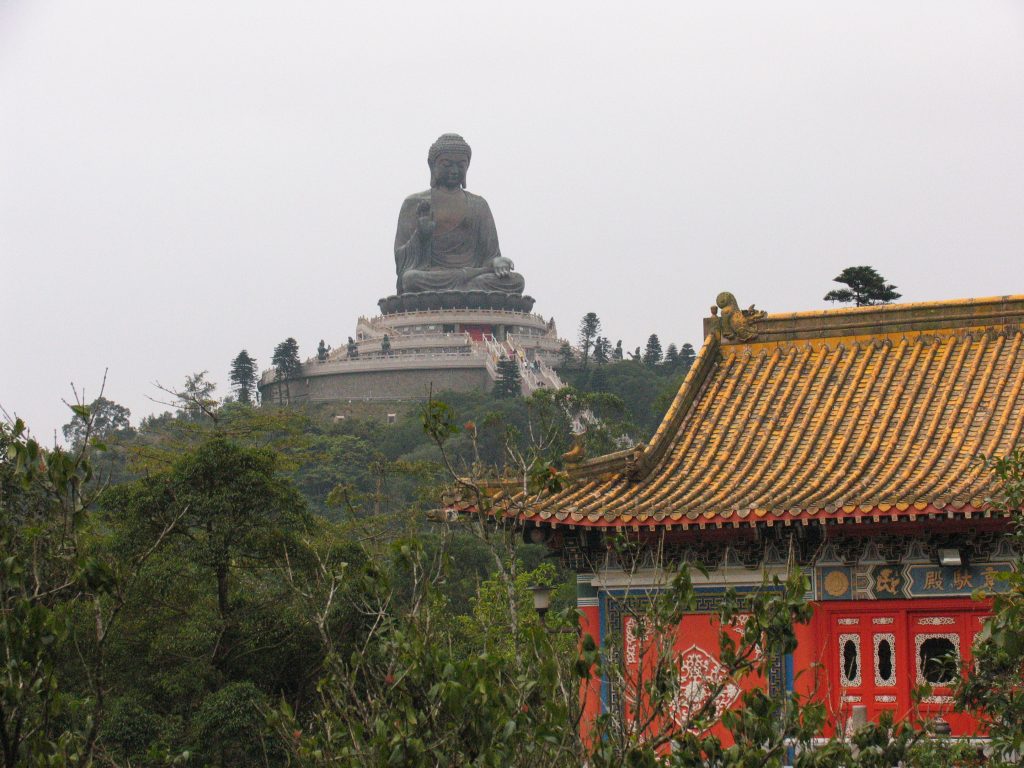 Without question, the most spectacular visual treat Hong Kong offers is the skyline after dark, when the buildings turn into undulating sculptures of color. Every night, there is an eye popping “Symphony of Lights” show that involves 30 office buildings over a one mile stretch of waterfront. We ferried across the bay to watch the spectacle from the Kowloon Promenade, which offers the best view. Instrumental music erupted through hidden speakers as dancing lights sprang from the structures across the bay. How is it done? Ah, the magic of technology.

We woke early and shuttled back downtown at 8 AM. We were dropped off in thick fog that truncated the buildings and coated every surface in thick dew. Today is New Year’s Eve. The Year of the Tiger starts tomorrow. Another “must do” is taking the tram (originally built in 1888) to the top of the 1,800 foot Victoria peak to see the “famous” view of the city below. We saw nothing, but enjoyed the thrill ride to the top as the tram climbed at a 45 degree angle. I couldn’t help but fantasize about the breaks giving way, and how long it would take to hit bottom….

Next, we rode the 1/2 mile series of “Mid Level Escalators”; currently the Guinness World Record holder for the longest covered escalator. It whisks 35,000 people uphill per day to homes and businesses, and has several places to get on or off. Hong Kong has mastered the art of moving people safely and effectively. Elevated walkways criss cross the city high above the traffic, complete with street signs and pedestrian “traffic circles”.

We spent the rest of our time strolling through the markets and watching the locals gather up their holiday meal. I had to turn my back on the fish market after seeing live fish tossed into plastic bags where they slowly suffocated among beets and turnip greens. At least the meat wasn’t moving.

Britain returned Hong Kong to the Chinese in 1997. Some residents who made fortunes fled to other parts of the world just prior to the event. Others, more confident in the future stayed, hoping that the area would maintain it’s entrepreneurial spirit – which so far it has. Hong Kong continues to be considered a “Special Zone”, operating under a “one country, two systems policy” to help ease the transition and keep the economy thriving.

We thought ahead and exchanged $300 USD into local currency when we got to Hong Kong to cover us for purchases on the China portion of this trip – knowing that when we got to Shanghai – it was would be Saturday and the banks closed. Smart thinking, huh? Well, guess what? You can’t spend Hong Kong bucks in the rest of China! It is a completely different currency! It’s been 13 years since the reunification, and they still haven’t merged the money? What are they waiting for?

Today, every passenger had to fill out a “health declaration” form, noting any symptoms of a cold or flu and submit to an individual visual inspection by the chinese authorities on board. They reserved the right to take a passenger’s temperature if they suspected a fever. High temp? No passport stamp for you! Steve and I continue in robust health, and were barely glanced at as we handed in our forms. Others weren’t so lucky. So here’s the question… why weren’t we subjected to this scrutiny before entering Hong Kong? Doesn’t the chinese government care if we infect Hong Kongians with swine flu or worse?

The East China Sea delivered 15 foot waves overnight. Big enough to remind us we were on a ship, not big enough to lose Steve. We hadn’t had any significant movement since the Bay of Biscayne after leaving Lisbon, Portugal over a month ago.

We had to skedaddle from Hong Kong at 2 PM, much earlier then we would have liked, to “make the tide” in Shanghai today. We were to pick up the local Pilot at 4 AM and be docked by 7. This had been prearranged a year in advance with the port authorities. Yesterday afternoon, the Captain was informed that our time slot had been changed to 2 AM. Why? Just because. It was impossible to shave two hours off our schedule, without cranking the Queen up to 33 knots, resulting in a tremendous strain on the engines. So, we had no choice but to wait 10 hours for the next opening.

The dismal weather intensified and followed us. We finally docked at 2 PM in torrential rain, 40 MPH winds, and near freezing temperatures at a container port about 30 minutes outside the city. With only a few hours of daylight left, we almost bagged going downtown, but did anyway. At the very least… we would take a bus ride and see some of the city. We walked a few blocks from our drop off point and knew the chances of getting lost were about 95%. Unlike Hong Kong, none of the street names have english translations and no one understood our questions. We tried valiantly to match up the symbols with our quickly disintegrating map. While being pelted with sleet we decided we’d rather be… Shanghaied! Well not quite… but I’m sure you are intensely curious about the meaning of the term, aren’t you? It originated here in 1871 and means to “force someone to join a vessel lacking hands by drugging or otherwise rendering them insensible”. Must have been a really relaxing place to hang out back then. Perhaps we will have to clean toilets in exchange for our Baked Alaska.